Currently eating: A Mocha Swiss Roll courtesy of my mom, who understands that it is ALWAYS time for dessert in Jayne Land.

Currently listening to: The Black Veil Brides and trying to decide once and for all how I feel about this band. Been hearing good things but haven’t formed a firm opinion yet. Will let all interested parties know by this week’s Mixtape Friday, I’m sure.

Currently wondering: If I should, in fact, pursue a career in human resource management, because my closest compadres have been telling me that it’ll make great use of my excellent managerial skills and my obsession with power – I mean, my love of humanity. Yeah.

Recently watched: The Silence of the Lambs and Hannibal, consecutively in one sitting. Which is something I’ve never done before despite having seen both films, the latter of which I believe was extremely subpar compared to the former. Anyway, it got me thinking about Prion Disease and how it would’ve added an interesting layer to Hannibal’s character, because then you’d have this cause-and-effect conundrum about whether or not he was insane to begin with and that’s why he gets all cannibalistic, OR if it was all just circumstance (like, say, if he were a surgeon and he just got curious or licked his fingers after surgery and got a taste for it or something fucked up like that) and ingesting human flesh is WHY he’s unhinged. Because this is what I think about on lovely Sunday evenings, guys.

Recently discovered: That it is not a good idea to discuss one’s fascination with the psychological workings of serial killers with just anyone. People spook easily.

Recently agonized over: Finding just the right volume to put my Pandora stations on that won’t give the random advertisements the opportunity to scare the fuck out of me and further my descent into complete deafness. 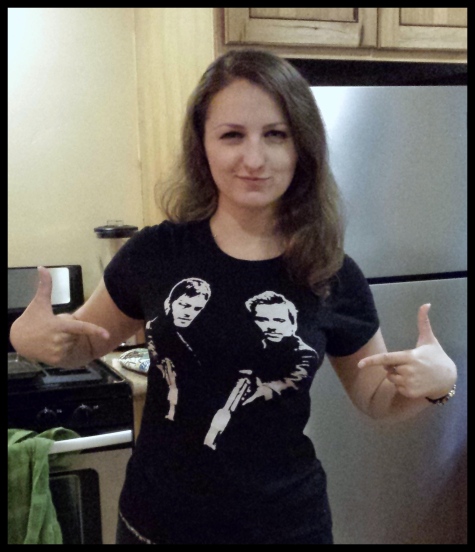 Currently eating: My massive pile of vitamins that I’ve started taking because I’m going through that phase at the moment. Some are chewable and some are so big, they look like they should be suppositories.

Currently listening to: All the advice my family can possibly give me about starting a new job that I’m super nervous about. Mostly pep talks.

Recently watched: Well, rewatched Boondock Saints 2. And yes, if you must know, I was wearing the shirt.

Recently discovered: That I own nothing appropriate to wear to one of those 9-to-5 jobs I hear so much about. I mean, how much booty is too much, ya know?

Recently agonized over: How early I’m going to have to start waking up for this new gig. Like, dark out early.