Now, to be clear, I think T and I are absolutely the stuff of legends – and legends, obviously, are inimitable bamfs (no one scarfs down corn dogs quite like us, and Sonny and Cher don’t even come remotely close to our singing duo chemistry [though, admittedly, most of the time we’re singing gloriously off-key to a song we’ve made up ourselves about how we’re eating corn dogs]). But every now and then – like whenever T and I encounter a mustachioed douche lord under the quixotic delusion that he’s a writer (and who believes that all the calling really entails is modelling himself after David Foster Wallace and leaning against things) and share knowing glances in which we contemplate the merits of a myriad of violent ways to crush the fucker back to his sad, sordid, and laughably hopeless reality – I can’t help but compare us to another pair of legendary boos: Daria and Jane.

After years of being looked at funny for shouting, “FUCKIN ROHIRRIM!!” while barreling out the school doors, receiving pathetically vacant looks in response to clever and appropriately timed puns or pop culture references, and having people assume we’re toting frivolous magazines in our purses instead of magnificent, literary, canonical fuckin tomes, T and I have learned that the best way to safeguard ourselves from disappointment – and safeguard the world from our blind rage – is to assume that everyone we meet is part of the lowest common denominator of the human race. The group who actually asks if Anne Frank has written anything else. The group who thinks Tolkien wrote a new book called Beowulf. The group who sees a clearly titled youtube video of Jimi Hendrix performing the Star Spangled Banner at Woodstock and thinks they’re watching Bob Marley. That group.

2. We speak in inside jokes.

We promise this isn’t something we try to do (unless you’re an annoying fucker who we’re trying to get rid of – in which case, we’ll make it painfully obvious to you that that’s what we’re doing, lest your ineptitude overlooks it). It’s just a common byproduct of years spent attached at the hip, sharing tater tots. T and I have developed a short-hand, like most boos are wont to do, and man, do we like reveling in it. We love shouting, “SOCK O’CLOCK!” across the room, and reliably fall into hysterics any time someone even mentions Livermore (#LivermoreNeverForget). It also makes me that much easier for us to talk about any subliterates in our immediate vicinity.

3. We both have creative and lovably nerdy pursuits.

Daria and Jane have writing and art, respectively. While T and I share the “writing thing,” we’ve also dabbled in such things as theatre, dance, avid video-gaming, wardrobe deconstructing, and bookshelf reorganizing (this is a lost art; one of my shelves goes in order according to time of purchase, the other according to genre, and still another according to beautiful chaos). Also, sometimes I doodle things. Not that zen doodling crap, but actually doodling. Mostly stick figures of myself as a warlord, but that shit totally counts.

And burgers. And chocolate malts. And food. All food. And when we’re not eating, we’re talking about eating. 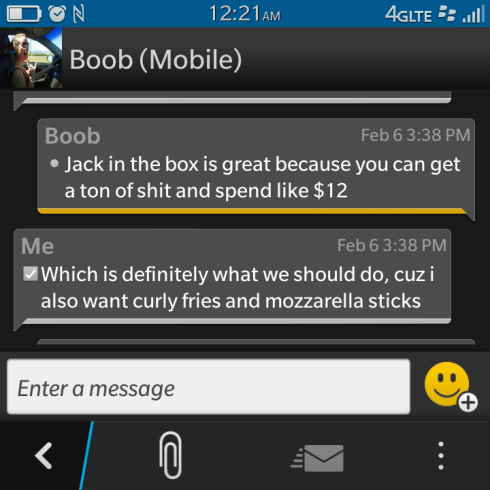 5. We also provide hilariously biting commentary on pretty much everything.

Because we love to scandalize.

6. Even our most touching moments are interspersed with idiocy.

The scene: Tatiana and Jayne are in T’s car driving back to the city from her kick-ass rehearsal dinner.

T: I’m glad you’re here with me, boo. Driving back with me on this country road.

J: *suddenly possessed by the spirit of John Denver* Country road, take me home…to a place…

T: It was such an awesome night and I’m so fucking excited for tomorrow –

T: – and I’m just thankful for everything about this quiet moment with you.