Ninety-five percent of the time, I’m the kind of shopper who sits in front of her laptop in her pajamas and fuzzy slippers, munching on cheddar and sour cream Ruffles, and casually switching browser tabs from Malcolm in the Middle on Netflix (everyone go rewatch that shit right the fuck now; it holds up so well, and that one episode where Malcolm and Reese both think the other one is gay literally never gets old) to a pictorial listing of cozy, oversized sweaters all in varying shades of cream (and no, my fondness for oversized sweaters that look pretty much exactly the same doesn’t make me sartorially predictable – it just means I’ve found my style, guys, geez!). But the times when I do decide to throw on public-appropriate clothing and brave the crowds (that I hate) and the stores that over-perfume their walls and their entire inventory (that I also hate – I’m looking at you, Abercrombie and Fitch!), Boo (naturally) is my favorite person to do it with. Mostly because:

1. She and I are both strategic shoppers.

Boo and I aren’t the types to wander around aimlessly; that’s fucking pointless and a waste of valuable time. Instead, we’ve already got in mind what we need (just this past Tuesday it was chic, work-appropriate clothing and shoes for her, and sweaters [in cream, obvsies] and flowy blouses for me) and we’ve narrowed down our stops to the shops that would suit us best (Anthropologie, Zara, and Nordstrom – when I allow myself to forget about the horrific three months I spent working there back in my youth – are our usual go-tos). Not only does it eliminate needless temptation, but it also makes efficient use of the time we’ve got together. Which is important because…

Whether in snack-form, meal-form, or drink-form, food – and when and where we’re going to consume the fuck out of it – is usually how Boo and I like to break down the day. “Okay, now that we’re done with the first store on our list…should we have lunch now or hit up another store and THEN have lunch?” Now. The answer is always now.

On our most recent shopping excursion, it was a lunch of meatloaf, sandwiches, mini crab cakes, and fruity cocktails at the Cheesecake Factory, followed a few hours later by indulging in our renewed obsession with boba drinks, as picture above. (Speaking of which, what the hell is the difference between tapioca, boba, and pearls? I feel like as an Asian, I should know this; but then again, I also don’t know how to use chopsticks, and I hate Hello Kitty and tiny, useless, decorative knick-knacks that serve absolutely no purpose, so who am I kidding – I am clearly a terrible Asian [it’s cool – I’m only half, I can live with it].) One would think that the consumption of food would be a hindrance when trying to on clothes – one would think. But it’s an art we’ve mastered.

3. We take full advantage of the Macy’s furniture department. 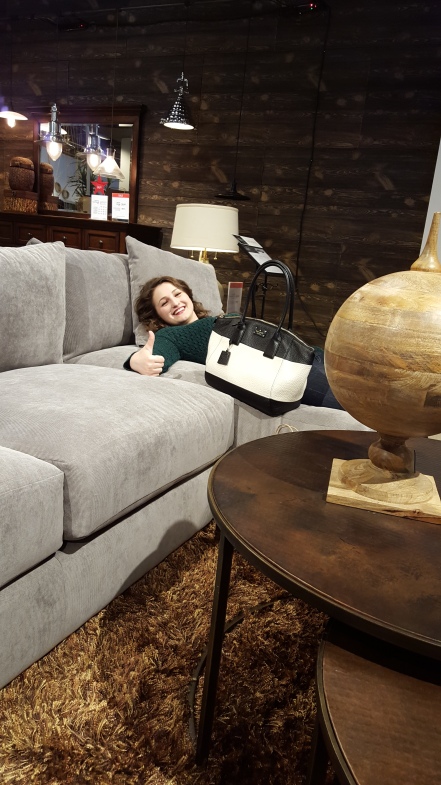 We sit, we lounge, we sprawl out like hobos who’ve found a new temporary home. I go on a mad hunt for a big, red, fabric couch that’s so comfortable that when I lay down on it, I’ll think I’m dead. Boo makes mental notes about end tables and the library she needs to set up in her future house where the burgundy leather couch we happen to be sitting on is obviously going to go. We briefly consider scaring customers away by putting an albatross around my neck and shoving me inside a large ottoman from which I will pop out at the worst possible time screaming, “IT IS AN ANCIENT MARINER!!!” And then sometimes I squeeze in behind a bar and live out my secret wish to be a pub proprietor.

4. We chat so much, it feels like the whole day has just been one long, satisfying, open-ended conversation.

A conversation about revenge plots that end with us bathing in the blood of our enemies (okay, maybe not…just a little warlord humor there for ya, NSA); Russian dystopian novels from the 1920s and how fucking creepy Shirley Jackson is; our new career paths and how we’re both going to take over the entire. fucking. world; how I’ve recently figured out that I have basically no ass and should probably start doing squats or some shit (“I feel like my ass muscles just don’t exist.” “Maybe they just need to be activated.” “I keep trying to clench them, and nothing’s happening.” “Wait, are you clenching them right now?”); how we absolutely need to travel abroad together and take another defining step in our legendary friendship (and preferably by then we can hire some poor film student to follow us around and compile footage of our adventures [like us playing Pink Floyd songs on bag pipes in Scotland while wearing Jewish tartans]). It’s honestly the best part of any shopping day with Boo, and arguably the best reason not to shop alone.