Few events excite me more than Meatloaf Friday at this hofbrau I go to, but chief among them is the single biggest sporting event in the world–the World Cup.

I get giddy thinking about my favorite teams competing against the best of the best, anticipating the energy of a good sports bar or pub as everyone celebrates my team’s wins, and imagining the millions of people throughout the world who are cheering with me, live, at this instant, for my favorite players’ successes.

So, when I realized Cottage Week was going to overlap with the World Cup, I knew I’d have to bring Jayne into the soccer fold (because it’s important to do things together) and hope she enjoys it as much as I do (or at least tolerates me as I react emotionally to every scrape and penalty).

We began with Italy vs. England. 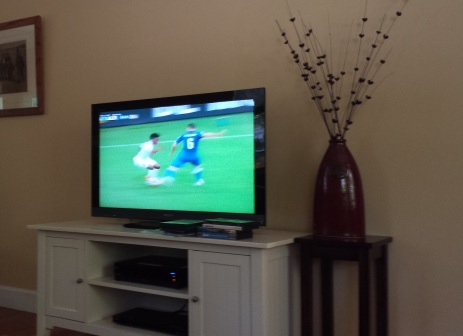 In which Jayne had this to say about the English goalie: “He looks like a peach crayon.”

After explaining the nuances of the game (“Each team is trying to get the ball into the other’s goal.” “OOOH! I get it now.”), I started pointing out techniques and strategies that Jayne should look out for to help her get a feel for what makes it such a beautiful game.  It may have been a bit overwhelming.

I also went into nostalgia-mode, telling her about memorable past games and the histories of some of the squads. Reclining on a cushy lounger, I felt like an old man boring the kids with his stories of youthful glory.

But Jayne got into it super quick, leaning in at all the tensest moments, and seemed to enjoy the harrassing comments I hurled in England’s direction. Sorry, I’m not sorry, Sturridge. She even joined in like a true fan to cheer on Italy’s goals (and berate the English with me. That’s love).

When I was done dancing victoriously around the house, we celebrated the best way we know: with food and silliness.