Every boo goes through an evolution of sorts in her lady bromance. You go from primordial boos, to early/primitive boos, to upright-walker kind of boos. I used to be in the upright camp, having conquered ominous trees in cute-as-fuck small towns, a biblical plague and a homicidal mouse in a mansion of horrors (#LivermoreNeverForget), and the writing of a soon-to-be cult classic young adult novel, all with my partner in crime. Together, I thought we’d seen it all, done it all, and ate it all; I thought I was already the most evolved boo I could possibly be; I thought we had arrived.

But last year, I suddenly got called up to the big leagues (yeah, the extended evolution metaphor is over; it’s time for the metaphor vaguely related to baseball, about which I know nothing). Last year, my then newly-engaged best boo stared at me puckishly across the table at brunch and asked, “Boo…will you be my maid of honor?” And so I dove head-first, grinning like a buffoon, into my year-long evolutionary journey (never mind, that metaphor’s sticking, apparently) from a Maid of Honor, or a MoH, to a towering, majestic, “do what the bride says or I’ll hang you from a tree by your useless, pathetic intestines while a pack of starving wolves circle you maniacally!” MoH-FO: Maid of Honor – Fuck Off!

The differences are subtle, but undeniable: a MoH does what she’s told, but a MoH-FO anticipates your needs; a MoH will offer her shoulder when you’re stressed about the incompetence of LITERALLY EVERYONE, but a MoH-FO will repeatedly and unrelentingly harass everyone out of the dark assholes they’re hiding in until they do their goddamn jobs; a MoH will cry as you walk down the aisle, but a MoH-FO will cry the ugliest and most uncontrollable of ugly-cries like an abandoned third-world orphan. Anywhere. Any time. At random intervals. For no distinguishable reason whatsoever. Like this:

For those curious souls brave enough to consider joining our league (The League of Extraordinary MoH-FOs…coming to a comic book that will be poorly adapted into a film by Michael Bay near you!), or for those who think they already have, here are the habits and behaviors that indicate a MoH-FO evolution. You can trust me on these; I may be retired, but I’m in the hall of fame.

1) MoH-FO Thought: “Feelings? No one but the bride gets to have feelings! I snort-laugh, sinister-laugh, and Dracula-laugh in the face of their feelings!”

The first move I made as T’s MoH-FO was shamelessly declare my complete and utter lack of regard for anyone involved in the wedding but her (and her man, of course, but he had his best man – his BM-FO? – looking out for his interests) – and I did so in no uncertain terms. Feeling a little left out and neglected on the wedding planning front? I wish that I wish I could care. Suddenly feeling struck with the seeming endlessness of your singledom? Get a therapist. Feeling way too busy to contribute at all to any of the events and activities? Hire a fucking personal assistant and find a way to deal. If this approach seems heartless, if it seems unforgiving, if it seems demeaning and inconsiderate and just down-right bitchy as fuck – imagine yourself as the bride with a MoH like that. A MoH who will rally around you and advocate for your wishes and your wishes alone. Starting to sound a lot better, isn’t it?

2) Your arsenal of insults increase by a whole universe.

I like to pride myself on the infinite number of colorful ways I’ve managed to call people assholes. Among those, “douche lord,” “ass-hat,” “turd-balls,” and “subliterates” are my go-tos. I’ve told people that there should be studies done on their level of incompetence, and have contemplated out loud (waaaay out loud) whether causing them grave bodily harm would somehow assist in helping them bleed out their ineptitude. When I became a MoH-FO, this talent got all the more pronounced, to the point where everyday and multiple times a day, I was scolding pretty much everyone and telling them to fuck themselves and blow me. And I did it with class, yo. The fact is, planning a wedding – while a joyful and ultimately rewarding experience – is stressful as fuck for a bride while it’s all happening. The last thing she needs is having to deal with even the remotest possibility of someone fucking that up, and it’s a MoH-FO’s duty to verbally clothesline aaaaaaaall the bitches into submission and prevent a shit-storm from happening.

3) Death-glaring is your Olympic sport.

I have an “evil stepmother” glare that would make Walt Disney diarrhea in his grave. It is an art form, and I found myself using it the most during the year I spent as the most terrifying MoH-FO the world has ever seen. No one – not even innocent, misguided waiters (yeah, I haven’t forgotten about you, idiot old dude at Scarpetta when we were in Las Vegas for T’s bachelorette party! You’re on my goddamn list!)  – are allowed to make flirty comments or classless marriages jokes to the bride. No one is allowed to interrupt the bride’s spiel on the details of her ceremony and reception with their own dreams and fantasies about their own big day (because no one here fucking cares). No one is allowed to show up late or leave early, and no one – NO ONE – is allowed to complain. Which brings me to…

4) MoH-FO Thought: “Opinions? NO ONE GETS TO HAVE THOSE EITHER!”

As the primary by-product of my general lack of a fuck for anyone else’s existence, my aversion to anyone else’s thoughts, suggestions, and ideas was also something I made abundantly clear early on. If it’s not in keeping with T’s vision, if it has nothing to do with what T wants, if it goes against everything that is her jam, her style, and her personality, then it is fucking useless to me and so are you. What makes being a MoH-FO such a position of honor (and power) is the fact that you are quite literally the bride’s red right hand, her executioner, and her first sergeant. You can – and should – be blunt and sharp and even a little mean, in the places where she can’t but specifically call for it; you get to tell the various idiots championing their own ideals and pushing for what they believe she “needs,” (because, believe me, they will pop up from every godforsaken circle of hell) to shut the fuck up and go fuck up a tree; and, most importantly, it’s you who needs to remind her when she’s overwhelmed by this bullshit parade, that none of that shit matters – that it’s her day, and she gets to make it anything she wants.

5) There is serious talk about you strong-arming uninvited and unwanted assholes the hell out of here, there, and everywhere.

I don’t know when it became socially acceptable for people to bring complete strangers who have no kind of relationship with the bride or groom to a wedding, but apparently there are whole tribes of ass-fucks in the world who believe it’s okay to inconvenience the catering staff, the wedding party, and all the guests by letting who I can only assume are their pathetic, lonely friends with nothing else to do tag along to the wedding of two people they literally have never met. T voiced her concerns to be about this from the very beginning, and I, of course, eagerly volunteered to vet the fuck out of all the incoming guests and bounce any stray turds the fuck out of there. Fortunately, it never had to come to that. But the world will never know just how serious I was about following through on my threat (I had speeches and various Bruce Lee moves planned, in case things got dicey…it would’ve been glorious!).

6) You maintain your composure long enough to get through your eloquent and touching speech. Then ugly-cry (again) the second it’s over.

I wrote the first draft of my speech within a week of T asking me to be her MoH-FO. It usually takes me a painfully long time to even write what I consider to be a satisfactory sentence, but that speech? That speech came easily and naturally – because, honestly, I feel like I’d been writing it slowly, in my head, throughout our whole lady bromance. I had always known, in some way and in some form, what I wanted to say to her and her dude on their big day. I had the finalized draft all ready and typed up on a word document on my computer not too long after, and for the months that elapsed between then and her wedding, I read, reread, and rehearsed it an embarrassing number of times. “I WANNA MAKE EVERYONE CRY FROM THEIR SOULS!” I joked to her frequently (and I was dead serious about this). But what I absolutely didn’t foresee or prepare for, was just how much the whole act of it – getting up in front of everyone who loves my boo as much as I do and was there to celebrate her like I was, and revealing to them all not just how much she and her friendship mean to me, but how happy I was for her – would drive everything home for me. I got through it okay – because I’m a BAMF like that – but the second I verbalized the final sentence, the second the applause sounded, I buried my face into the nearest shoulder (the shoulder of who just so happened to be T’s mother’s lifelong boo – how serendipitous is that!) and openly bawled. Then I bawled on my boo. 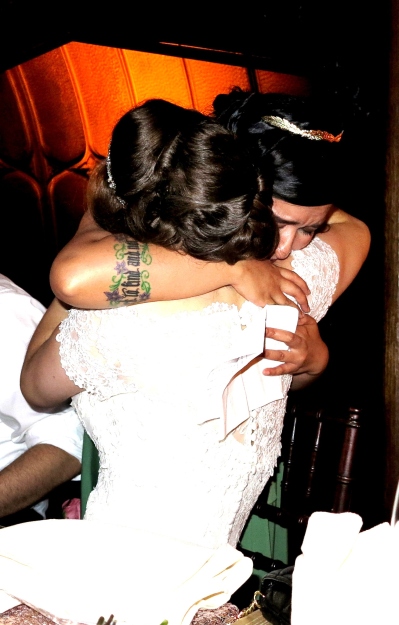 7) You romantically (and awkwardly) profess your undying love and loyalty to the bride.

In her car, on the way to her rehearsal dinner from the wedding venue, T and I had a precious twenty minutes alone on the last night before the beginning of the rest of her life. People have always said that friendships change when one of the two gets married – that friends see each other less and less, and there becomes a noticeable and undeniable shift in the relationship, caused mostly by the different stages they’re both in. I’ve seen my fair share of changes in friendships; I am someone who’s been left and has done the leaving many, many times before. What made this different, though, was that for the first time ever, I wanted to vehemently refuse to be left, and I had no desire to do the leaving. I refused to drift even if T drifted; I refused to let there be less of anything in our friendship, no matter what. This friendship is different because I can see it, and I can see me, withstanding anything. I can see me staying and holding up my end of it proudly, because, simply put, I don’t want to be best friends with anyone else. Anyone else would just be settling, would just be subpar. I wanted to say this to T, to give her a really, really, eloquent version of this in that twenty minutes we had in her car. But because I’m inept with vocalizing human emotions, all I managed to get out was some pathetic mumblings about how I wasn’t going anywhere, and I’m pretty sure I made a terrible breakfast food analogy about being the pig. But, as always, she understood what I was saying – that I was promising to be a boo, come what way. Most importantly, though, I was promising her that whether it was the minor leagues or the major leagues, a scrimmage or the motherfucking World Series, we’d never stop evolving.