As boo-mates, T and I share a love of an infinite number of things. We love songs in which men wail mournfully about losing their one true love; we love getting four orders of imperial rolls to take home and share from our favorite Vietnamese restaurant even though leaving them somewhere in the backseat of her car for even a few minutes makes the whole vehicle smell like fart; we love when our enemies falter gloriously and helplessly before us, as if they fell apart on their own specifically because they knew they should. Mostly though, T and I share a boundless, limitless love for meatloaf (the food, not the guy….though, we’re fond of him too, don’t get us wrong).

It is the kind of love that has us seeking it in pretty much every restaurant we eat in. It is the kind of love that has caused T to stalk it to no end at one particular hofbrau (it’s so fucking amazing and so popular there that they consistently run out of it pretty much every time she’s there [which, by the way, is something that’s kind of baffling to me; HOW DO YOU RUN OUT OF MEAT?]). It’s also the kind of love that prompted her to text me, “GUESS WHO’S GETTING MEATLOAF TOMORROW?!” one random afternoon a few weeks ago and commit one of the most beautiful acts of boo-ship in the history of our friendship: the Meatloaf Delivery

Or, as she later proclaimed, “DING-DONG, IT’S MEATLOAF!”

My boo braved meatloaf thieves at the hofbrau, cross-Bay Area traffic, and possible food spillage all over herself and the car, all because she loves me (that’s right, motherfuckers!) and wants to give me a reason to make this face: 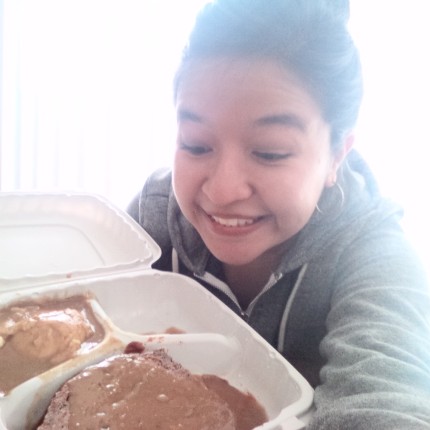